Succeeding By Helping Others Succeed 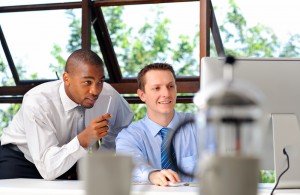 “It is literally true that you can succeed best and quickest by helping others to succeed.” Napoleon Hill

Napoleon Hill was a young man when he interviewed Andrew Carnegie, at that time the richest man in the world. At the end of their meeting Andrew said, “Napoleon, I would like to introduce you to 500 of the world’s wealthiest men. I’d like you to interview them to find out what made them so successful.”

Andrew then explained that caveat of the arrangement. He revealed, “I believe that this task will take you 20 years to complete… And I’m not going to pay you a dime to do it.” Napoleon had a choice. He could stay where he was, successful in his career, and have a nice life – or he could potentially change the world. Thankfully for all of us, he chose the latter.

What Napoleon did not know is that when Andrew Carnegie made him this proposal, he had a stopwatch under his desk that was set for 60 seconds. After 60 seconds, Andrew’s offer was going to be off the table. Napoleon said, “Yes,” before the time elapsed and history was made.

If you were offered the opportunity of a lifetime, would you take it? Would you get out of your comfort zone and blaze a new path into the unknown? It’s not easy to do. It’s scary at times. However, many times it’s exhilarating, captivating, and very very fun.

When you make decisions quickly you are more likely to go with your gut feeling and not wait until all the voices of impossibility start shouting in your head. Just for today, be courageous, and go with your gut. You never know who is holding the stopwatch.

PS – If you’ve never read the book “Think and Grow Rich” by Napoleon Hill, do yourself a favor and go out and get a copy TODAY! I beg you.

If you’re looking to bring inspiration, motivation and fun to an upcoming meeting or event, I’d love to be your speaker.  http://grategy.com/work-with-lisa/