Don’t be too timid and squeamish about your actions. All life is an experiment. 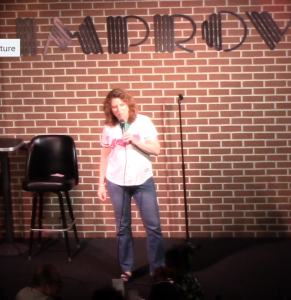 As a person who speaks for a living, you would think it would be easy to get on stage for a mere five minutes. Unless, of course, that five minutes is at the Improv. Being funny during programs is one thing – HAVING to be funny for a straight five minutes is quite another.

For three weeks, I took a comedy class at the Improv. Four hours each Saturday for three weeks in a row. Graduation included a five-minute set at the Cleveland Improv. Absolutely terrifying!

After putting tons of work and practice into it, it came out well. Even my siblings – who were at the brunt of the humor – found it funny. Whew!

Is there something you’ve been putting off because you’re scared and don’t want to fail? If so, consider that the worst thing that can happen to you probably won’t, and the experience of taking a risk and doing it will be even greater than you imagined!