Every new beginning comes from some other beginning’s end 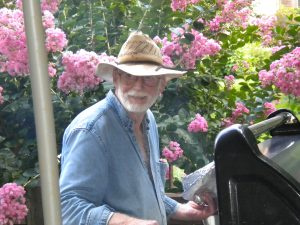 Although I was an adult when Mom married Gene, he was very much like a father to me. When I couldn’t afford my classes at the local community college, Gene lent me the money and then ripped up the check when I tried to pay him back. He was from Texas – cowboy boots, Stetson hat, and a pipe was pretty much his uniform. As a blended family, we had our ups and downs throughout the years, but we always made it through.

Thankfully, my siblings and I all had the opportunity to talk to Gene one last time before he passed away at the hospital. My mom called us and held the phone up to his ear. He couldn’t talk back, but he could listen, and Mom said his eye lit up when he heard us. Gene will be missed.

If there’s someone in your family or a friend that you haven’t connected with for a while, or maybe there was an argument from years ago, that you don’t even remember the reason for the falling out, why not pick up the phone and reconnect? You never know when the last conversation you have with someone will be your last conversation. I’m glad the last words I told Gene were “I love you.”