Music is the Soundtrack of Your Life 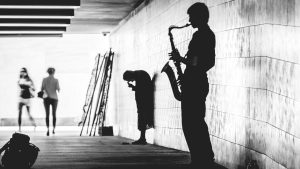 “Music is the soundtrack of your life.” Dick Clark

The music of the eighties has always been – and will always be – the soundtrack of my life. So when the New Kids on the Block (NKOTB) Mixtape Tour came back to Cleveland, Scott and I knew we had to be there. So, Tuesday night, that’s exactly where we were.

I was a little “old” when they came out for NKOTB, but these guys put on a fantastic show. Scott and I are big fans of Donny Walhburg – not only from Band of Brothers and Bluebloods, but we also watched their reality TV show and fell in love with their family. Donny’s energy and the joy he gives to the performance made the evening magical.

Before the concert, Scott and I went to Wahlburgers for lunch, hoping to catch Donny before the show. His brother, Chef Paul, was there, and we got to meet him and take a few pics with him. He’s really nice, and the opportunity to meet him made my day.

Joining NKOTB, were Salt-N-Pepa, En Vogue, and Rick Astley – so it was a true celebration of awesome music. We stayed out way too late on a “school night,” but it was worth it!

What is the music of your life?

PS – After two years of no concerts, it was great to be back to live music! The last concerts we attended were the NKOTB Mixtape Tour and the Rolling Stones in 2019.