It’s always better to err on the side of too much gratitude instead of not enough. 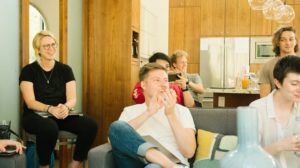 “It’s always better to err on the side of too much gratitude instead of not enough.” Lisa Ryan

During my program, “Changing the World, One Thank You at a Time,” one participant shared a story about an employee who spent the entire night at their company doing a major overhaul to their computer system.

This manager knew the employee had been there all night because he was wearing the same clothes – no doubt he was there overnight and he hadn’t slept much.

The employee came into the office of the big boss while his manager was also in the room. The manager thanked him profusely for the extra effort he put into this project.

The Big Boss replied, “Why are you thanking him, that’s his job. He’s gets paid for that.”

Talk about letting the air out of a balloon! The manager simply looked at him and said, “Why do you have to be such an (insert swear word here)?” and walked out of the room.

Thankfully, the manager still has his job, and the employee thanked him later for having his back and expressing his appreciation. This manager now has an even more loyal employee who knows his manager will not throw him under the bus to make himself look better.

PS – Have you thanked your kids for cleaning their room on their own? Your spouse for taking out the trash? Your coworker for pinch-hitting for you while you were out of the office? Pay attention and do that today.

PPS – Here’s how you can use mistakes as opportunities: https://youtu.be/wo5PiOiuS78