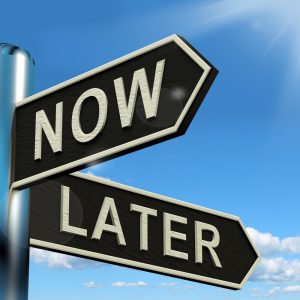 “The credit belongs to those who are actually in the arena, who strive valiantly; who know the great enthusiasm, and spend themselves in a worthy cause; who at the best, know the triumph of high achievement; and who, at the worst, if they fail, fail while daring greatly, so that their place shall never be with those cold and timid souls who know neither victory nor defeat.”  Theodore Roosevelt

I didn’t go to college right out of high school. It wasn’t brought up as an option in my family. It actually never occurred to me to attend college until I was working at an Executive Search firm and saw the career differences between people with degrees versus those without formal education. At that point, I began attending college on a very part-time basis.

Friends and family constantly asked, “Do you know how old you are going to be when you get your degree?”  My answer was, “I’m going to be the same age with or without a degree, so I might as well have one.”  Eight years later I received my Associates degree (the first in my family to have a degree). Four years later, I accepted my Bachelor’s degree and two years later, my MBA. To this day, the achievement of my Bachelor’s degree reigns as one of the happiest and proudest moments of my life.

Many times, the things we regret most are the things we DIDN’T do or the experiences we chose NOT to have?  Taking the chances necessary to pursue our dreams is scary, and yet that’s where our greatest successes come from.

What would you like to achieve?  If the fear of failure is holding you back, simply ask yourself the question, “Which is worse – failure of regret?” If you fail while daring greatly, there is no shame.   Chances are your triumph will be even more spectacular when victory is achieved.

We can learn lessons from our failures, but there is no cure for remorse.

Want some weekly inspiration?  Short, sweet and to the point, it’s the “Gratitude Thought for the Week.”  Sign up at www.grategy.com