The Language of Gratitude 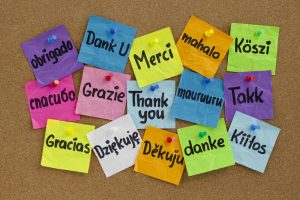 If you’ve forgotten the language of gratitude, you’ll never be on speaking terms with happiness. – Unknown

In Marci Shimoff’s book, “Happy for No Reason” she talks about a woman who had just gone through a painful divorce and was forced to move in with her elderly father, whose wife had just died. They were about “as glum as two people could be.” They had heard about the power ofgratitude and decided to try it – expressing three things that they were grateful for in the morning before the daughter left for work. The first day was very difficult. It came down to her being grateful for a pretty vase that they had in the house. That was all the gratitude she could muster.

As time went on, the practice became easier and easier – to the point that they had to stop before they were both done or the daughter would be late for work. Gratitude is a PRACTICE. When we develop the habit, we find that no matter where we are in life, we can always find SOMETHING to be grateful for. Maybe on some days it’s the fact that there isa pretty vase in the house. Start there. Start anywhere. It works.

On a day when you have some time, start writing down a list of EVERYTHING for which you are grateful. Set the timer for a certain amount of time and write. The first items will come quickly. Continue to write, without stopping or thinking about what you’re writing. You’ll develop a list on which some things that came up may surprise you. Put this list in a place where you can access it on the days you really need it.

Want to receive your own Gratitude Thought of the Week? Just go to http://www.grategy.com Thanks!